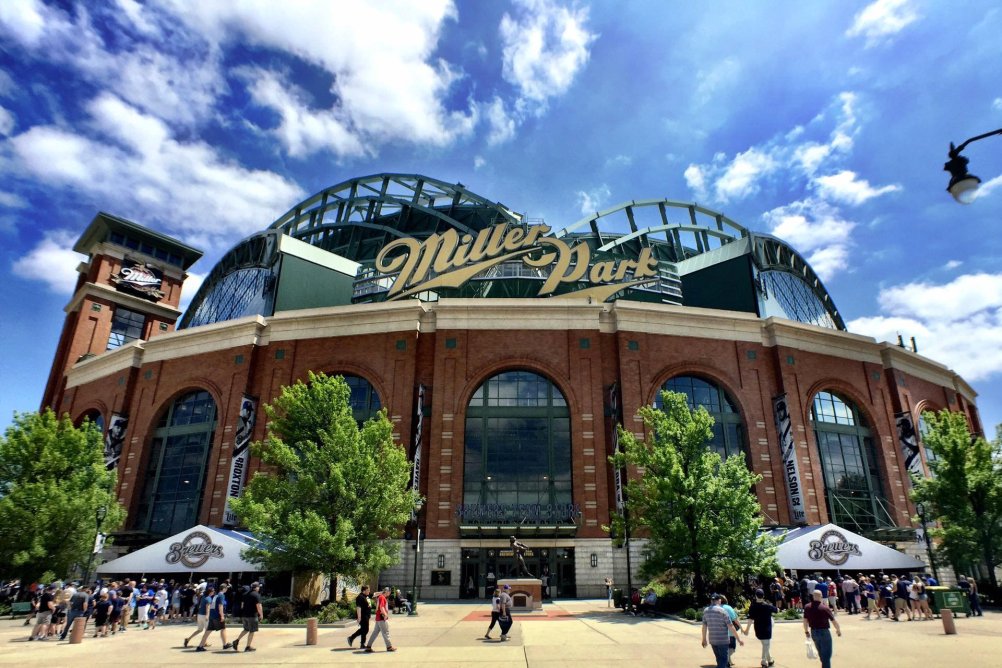 When ESPN initially announced the Battle of the Ballparks, with Pittsburgh’s PNC Park and Boston’s Fenway Park getting first-round byes, I was incredibly surprised to see Miller Park as the 24th seed. The combination of pride and lack of national respect has Brewers fans flocking to the polls, where Miller Park has now found itself in the final four after beating Angel Stadium, Dodger Stadium, and PNC Park.

Update: After winning against Camden Yards, Miller Park is now taking on AT&T Park for the Championship

As a Brewers fan, and resident of Milwaukee, it’s painful to see ESPN senior writer Jim Caple consistently dog Miller Park. In the first round Caple called the Miller Park win a “bracket-busting upset.” In the second round he went on to say we “pulled off an upset, beating Dodger Stadium one day after whipping Angel Stadium” and that “Milwaukee fans have their work cut out for them in the third round, though, with a matchup against our No. 1 seed — Pittsburgh’s gorgeous PNC Park.”

On Twitter, Caple continues to cheer for each Miller Park opponent to outvote Milwaukee. He must really believe Miller Park doesn’t deserve it’s place among some of the best ballparks in baseball. Can Milwaukee and Brewers fans turn out the vote to beat beautiful Camden Yards, the stadium that kicked-off the revival of ballparks in major league baseball?

Maybe Caple just needs a lesson on each category, as it applies to Miller Park, to better understand what Brewers fans see. ESPN instructed readers to base their vote on location, architecture, history, seating, price, concessions, scoreboards, transportation, roofs, and grass.

Before opening in 2001, Milwaukee did consider a downtown location for the new stadium before it was finally erected next to County Stadium – at the west end of the Menomonee Valley. It would have been great to see the structure find it’s way to the lakefront or downtown Milwaukee, but the Valley has tremendous history and is vital to the growth of our city. Miller Park continues to spark a rejuvenation in the area.

It’s also important to note that without the abundance of parking, the tradition of tailgating would have been lost for Milwaukee Brewers fans. Perhaps ESPN and Caple disagree that this is an important tradition, but even MLB has called tailgating a “tradition in Milwaukee” and that “Miller Park hosts a unique atmosphere unrivaled in the Majors.”

The neo-classic ballpark has a brick facade and many other details to cause even a casual fan to reminisce about the old ballparks.The Milwaukee Business Journal reported that “Miller Park stadium district director Mike Duckett crunched the numbers and said the roof was significant in making Brewers home attendance increase by about 1 million fans annually since the new stadium opened.”

Miller Park has seen over three million fans comes through the gates in three of the last four years – an impressive feat. Lets not forget, Milwaukee continues to be one of the smallest markets in all of Major League Baseball.

Personally, I miss the ivy in the outfield that was removed prior to the 2010 season, but consistent upgrades continue to make this a great stadium. And as of April 2012 Miller Park is LEED certified, “making it the first stadium with a retractable roof and just the third Major League Baseball stadium overall to receive the designation.”

Does Jim Caple know that Milwaukee is the birthplace of the American League? Historian Ed Pahule states that, “on March 5, 1900 in the Republican Hotel in Milwaukee a group including Connie Mack, Ban Johnson, and Charles Comiskey met to legally incorporate the American League. That year the AL was not recognized as a major league, but in 1901 they achieved major league status fielding eight teams, the Baltimore Orioles (later moved to New York), Boston Americans, Chicago White Stockings, Cleveland Blues, Detroit Tigers, Philadelphia Athletics, Washington Senators, and the Milwaukee Brewers.”

While not specifically tied to Miller Park, it proves Milwaukee is a baseball city. And lets not forget Mr. Baseball Bob Uecker. He isn’t THE stadium, but he is part of our history with every game he calls.

During the seventh inning stretch, in addition to “Take Me Out to the Ballgame“, fans at Miller Park sing “Roll Out the Barrel“, to salute Milwaukee’s beer-making history.

And what about the Klement’s Racing Sausages? In October of 2011, the New York Times said “the Brewers’ sausage races have become such an iconic part of the Miller Park scene that players are often besieged by relatives seeking to participate.”

Imitation is one of the sincerest forms of flattery, but the Washington Nationals, New York Yankees, and Pittsburgh Pirates just can’t compare.

There has also been a few major events in the ballpark’s history:

While those two events are not the type of “history” ESPN and Caple are looking for, we are still a young franchise that has just begun to write it’s history. There is no way for a stadium like Miller Park to compare to the 100 years of history of Fenway.

But I’ve had a lot of great moments as a season ticket holder – and I’ll never forget Nyjer Morgan’s winning hit in game five of the 2011 NLDS.

Miller Park has a capacity of 42,200, and there really isn’t a bad seat in the house. Even walking along the concourse is a pleasure as you can easily see the field from anywhere. Some of the best seats on the second level are less than $30 each, including those behind home plate.

Even the worst seats in the house, the (aptly named) Uecker Seats are a deal. They are obstructed view seats located on the Terrace Level behind home plate, that sell for only $1 each. How can you beat the price of four quarters to see America’s pastime?

Miller Park also has the Stadium Club, the pen in right field, and beautiful suites.

More importantly, Miller Park ranks as the 3rd lowest for premium seats at $42.53 (the MLB average at $88.18). So Jim Caple, that seems like an incredible value.

Since it appears Caple’s own ESPN uses the Fan Cost Index for their reporting, I feel very comfortable using it here. If you need another source, how about Seat Geek? They calculate average ticket sale prices over the past seven days, and as of today the Milwaukee Brewers rank dead last at $26.66 per ticket.

And lets not forget the value at the concession stand – which I address below.

Caple has previously ranked Miller Park as having some of the best concessions (go bratwurst), yet we were also on the list as having the worst beer. That even Caple, and all his bias, can enjoy a good brat has to count for something.

In 2005, Sports Illustrated conducted fan surveys that rated Miller Park the best ballpark based on value per dollar spent. As a season-ticket holder I know many of those prices haven’t changed, including concessions, and if you want proof the Milwaukee Journal Sentinel looked at prices during the Mark Attanasio era. I also think the Milwaukee Brewers have done a great job diversifying the food available and addressing the need for healthy options. In 2011 PETA included Miller Park on it’s list of the top 10 veg-friendly Major League ballparks.

We’ve already talked tailgating, but when Wisconsinites can hear Dodgers announcer Vin Scully talk about brats you have to be proud. And it doesn’t stop there, whether its the NFL or MLB there are plenty of great commentary about tailgating in both the cold and warm months at Lambeau Field and Miller Park.

In 2011 the Brewers introduced a new scoreboard, and the single screen high-definition display is one of the best in baseball. It’s the fourth-largest scoreboard in Major League Baseball at 5,940 sq. ft. and came with a price tag north of $10 million. At the time,  Brewers Executive Vice President – Business Operations Rick Schlesinger said “when you factor in the overall size and resolution of the new display, we believe this will be the finest video board in Major League Baseball.”

Getting to Miller Park is quite easy. The ballpark is near downtown Milwaukee, has immediate exits off I-94, is easily accessed via public transportation and shuttles, is bicycle and pedestrian friendly, and did I already mention tailgating?

Also, don’t forget about the Hank Aaron State Trail which “provides a continuous connection between Milwaukee’s Miller Park Stadium and the Lake Michigan lakefront for bicyclists, walkers, runners, and skaters.”

Designed as North America’s only radial, retractable roof it is the signature feature of the ballpark. Having sat through sub-freezing weather and even snow at County Stadium, it is a necessity in Milwaukee.

Major League Baseball has also benefited from the Miller Park roof. I already mentioned the Astros-Cubs series from 2008. In April 2007, snow storms moved the Indians home opener to Milwaukee where attendance was 52,496 for the three games. Those are pretty fantastic numbers, and again proves that Milwaukee is a baseball city.

And according to the Milwaukee Journal Sentinel, “it’s Duckett’s opinion and that of the Milwaukee Brewers that the roof is actually a marketing tool. Last season [2011], more than 56% of the fans who came to Miller Park came from outside the five-county area. They did so, in large part, knowing that inclement weather would not mean postponing a game.”

The beautiful Helfaer Field doesn’t have a roof, but it is a wonderful softball park for children.

Even with a retractable roof, Miller Park has fresh grass. Always groomed, always beautiful, always ready for baseball. Do we get extra points for a roof and grass together? We should.

In ESPN.com’s 2011 “Ultimate Rankings” the sports network listed Miller Park as the eighth-best stadium among those representing all 122 major league sports franchises.

So Jim Caple (or is it incapable?), why dog Miller Park, Milwaukee, and Brewers fans? I don’t understand your strong bias against the ballpark. Is it just because we are not a major media market? Have you not enjoyed enough Brewers games? Are you a Cubs fans? How about you come back to Milwaukee after we win the Battle of the Ballparks and enjoy a brat, some polka, and a great game at one of the new cathedrals of baseball?

If you’re worried about the fans booing you, don’t. Milwaukee is one of the friendliest cities in America and we’d be more than happy to be your host. I’ll even buy the tickets. So how about it Jim, are you in?

And Milwaukee Brewers fans, lets get out the vote!